A new paper on improved methods for monitoring differential immune response activation was published in Volume 183 of the journal Clinical Immunology. Researchers report on a multi-center study in seven FOCIS Centers of Excellence to directly compare whole blood syringe-based system, TruCulture, to the current method of isolation of PBMCs for immunomonitoring.

To compare intra and inter-center variability between PBMC and TruCulture stimulation, the blood of 152 healthy donors was both stimulated in whole blood assay and after isolation of PBMC, across multiple centers. Following exposure to LPS, anti-CD3/anti-CD28, or media alone, samples were analyzed using multi-analyte profiling (MAP) for 55 proteins at Myriad RBM’s CLIA-certified laboratory. Focusing on analytes that were induced in both TruCulture and PMBC stimulation, further analysis was based on the 35 commonly induced proteins. 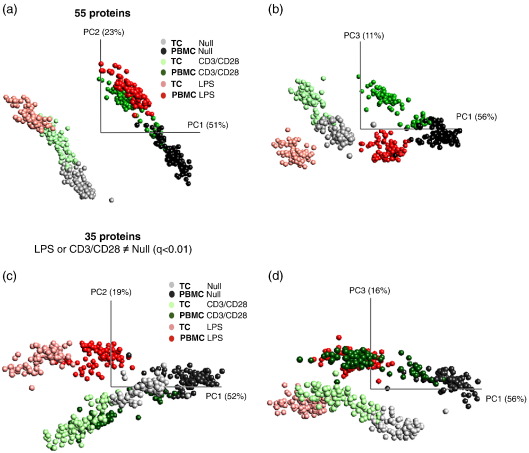 Identification of a commonly induced protein response. Principle Component Analysis of PBMC (dark shades) and TruCulture (light shades) conditions stimulated with CD3/CD28 (green) or LPS (red) and Null controls (black/gray) based on all 55 proteins measured by Luminex XMAP (A & B) or 35 proteins identified to be commonly induced by CD3/CD28 or LPS in both stimulation conditions (C & D). (D. Duffy, et al., Clin. Immunol. (2017))

When comparing the robustness of each stimulation method, the researchers did see similarities between both approaches but concluded the TruCulture system to have a greater dynamic range and a more robust stimulation with LPS and CD3/CD28 when compared to Null.

Inter-center variability was found to be greater in PBMC stimulation. Upon examination of media only phenotypes, PBMC purification identified 18 of 35 proteins differentially expressed between centers compared to no inter-center differential expression found in the TruCulture Null condition. LPS stimulation analysis revealed 29 of 35 differentially expressed proteins across all centers versus 4 proteins for the TruCulture system. CD3/CD28 revealed similar results as LPS. 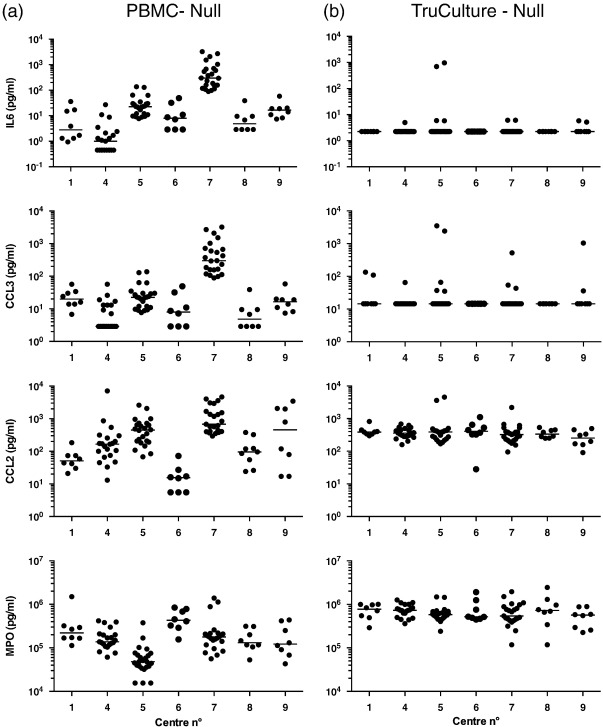 Although both stimulation methods had comparable intra-center variability, the large number or proteins that exhibited variance across the centers for PBMC stimulation demonstrated the challenge in standardizing the 50 year old technique of separating of mononuclear cells from whole blood. Blood samples are often transported from the clinical sites to central labs because such methods require highly trained technicians and sterile conditions. Blood sample collected directly in TruCulture tubes, minimize the bias and variability introduced by sample shipping and manipulation. The authors also conclude the amount of time between blood collection and stimulation can account for variability in the baseline protein concentrations in induced immune response. Combining these variables with additional steps of purifying, washing, and immune-modulatory chemical exposure, PBMC immunophenotyping leaves much to be desired for the study of induced immune responses in multi-center clinical studies.