The April 2017 issue of Biomaterials reports on an automated cell culture unit that was developed for the SpaceX CRS-ISS space mission that resulted in three dimensional growth of human endothelial cells in microgravity.

A spaceflight to the International Space Station, carried out in April – May 2016, included a study to examine endothelial cell (EC) behavior in respect to cellular proliferation and apoptosis under spaceflight conditions to examine the gravity dependency of EC tube formation.

Cell culture experiments on Earth are not easily replicated in space, therefore, researchers designed an automated experimental unit to carry out all procedures.  Before the spaceflight, the automated cell culture units were tested for biocompatibility, reliability, and were assembled meeting the quality checkmarks set by NASA.  The Science Validation Tests performed on the cells included flow cytometry, immunofluorescence staining, hematoxylin and eosin staining, RNA isolation, quantitative real-time PCR, and Human CytokineMAP (Multi-Analyte Profiling) from the cell supernatant, confirming the feasibility for such testing after spaceflight.

Prior to launch, the EA.hy926 cell line was cultured within the experimental unit and mounted to the SpaceX rocket. Cells were fixed with PFA and RNAlater, 5 and 12 days after launch.  Upon return, 3D cell aggregates were found in the cultivation chamber.  The cells were embedded in paraffin and stained with HE.  Microscopic examination clearly shows the aggregation of several cell layers together into spheroid and tubular structures. 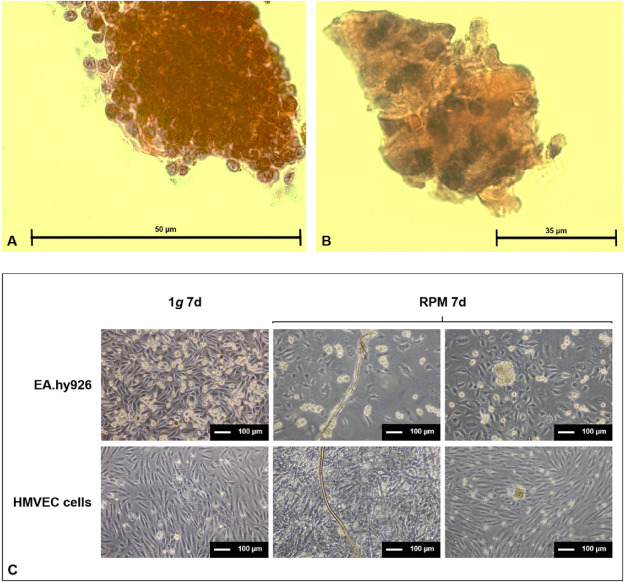 Histochemical staining of EC cultured on ground (A), on board the ISS (B) and native pictures of endothelial cells cultivated on the RPM (C). Biomaterials, Volume 124, April 2017, Pages 126-156

The SPHEROIDS spaceflight demonstrated, for the first time, that endothelial cells exhibit 3D growth in space.  This well-functioning automated culturing system allows for more experiments like this to be conducted in space.  Another International Space Station project is planned to take place this year with human thyroid cancer cells.  Further investigation may lead to a better understanding of the effects of microgravity conditions on the endothelium.